How the industry contributes to a more sustainable society

On November 26th and 27th, 2019, European Plasticisers invited specialised trade media from across Europe to their annual press visit sponsored by VinylPlus. For this seventh edition, the visit started in the Netherlands, at Vynova, a leading PVC resins producer, followed by the discovery of CIFRA Recycling in Germany, a company that recycles PVC that can then be reused in other applications.

The first day began with a site visit of Vynova’s plant in Beek which produces suspension PVC (S-PVC) through a process of polymerisation. Jonathan Stewart, Vice-President of the Vinyls Business for Vynova, explained the company’s commitment to sustainability as members of VinylPlus and Operation Clean Sweep, among other initiatives. He also highlighted Vynova’s commitment to sustainability through product innovation, including an initiative using Mass balance Verification to develop a new range of Renewable PVC resins.

“We want to create a dialogue around plasticisers that is based on scientific facts and the understanding of all their benefits and uses in everyday life. This begins with initiatives like this media field trip, where we open our doors to the press to explain and demonstrate the latest updates and regulations related to plasticisers as well as the most recent trends and challenges in PVC recycling,” said Michela Mastrantonio.

VinylPlus – the PVC industry’s commitment to sustainable development – was then introduced by Zdenek Hruska, Senior Manager for Public Affairs at the European Council of Vinyl Manufacturers. Mr Hruska discussed the role of VinylPlus in positioning the PVC industry within the broader Circular Economy discussion, as well as the organisation’s key part in uniting the industry and becoming a reference for authorities when discussing plastics issues. In 2018, all VinylPlus participating companies recycled a total of 739,525 tonnes of vinyl and committed to recycle at least 900,000 tonnes of PVC per year into new products by 2025.

Roger Loop, Secretary of Stuurgroep PVC & Ketenbeheer, the Dutch platform for PVC producing and converting industries, continued the presentations by giving an overview of the industry in the Netherlands. There are an estimated 30.000 tonnes of rigid PVC waste in the Netherlands each year coming mainly from pipes and window profiles. As early adopters of PVC converting, over 50% of it is recycled to create new 3-layer pipes with no sacrifice in the quality of the material.

The second day got off to a start with an intervention by Thomas Hülsmann, Managing Director of AGPU, presenting the status of the PVC industry in Germany. He stated that 37% of PVC waste in Germany goes into mechanical or feedstock recycling, while 62% goes to energy recovery. The vast majority of PVC consumption in Germany comes from window profiles (27%).

Bernard Merkx, Honorary President of Plastics Recyclers Europe and representative of ReVinylFloor, followed by showing how plastics can “go circular”, specifically in the flooring industry. He insisted on the importance of “adding value to waste” by creating more applications for recycled materials, and on the crucial aspect of dialogue between all stakeholders in the PVC value-chain.

The trip concluded with a visit to CIFRA Recycling where its General Manager, Jack Snijders, gave a tour of the facilities where journalists could see first-hand how flexible PVC can be transformed. The participants followed the entire recycling process from collecting and cleaning to grinding and filtering, better understanding the challenges that can be faced during the recycling process. 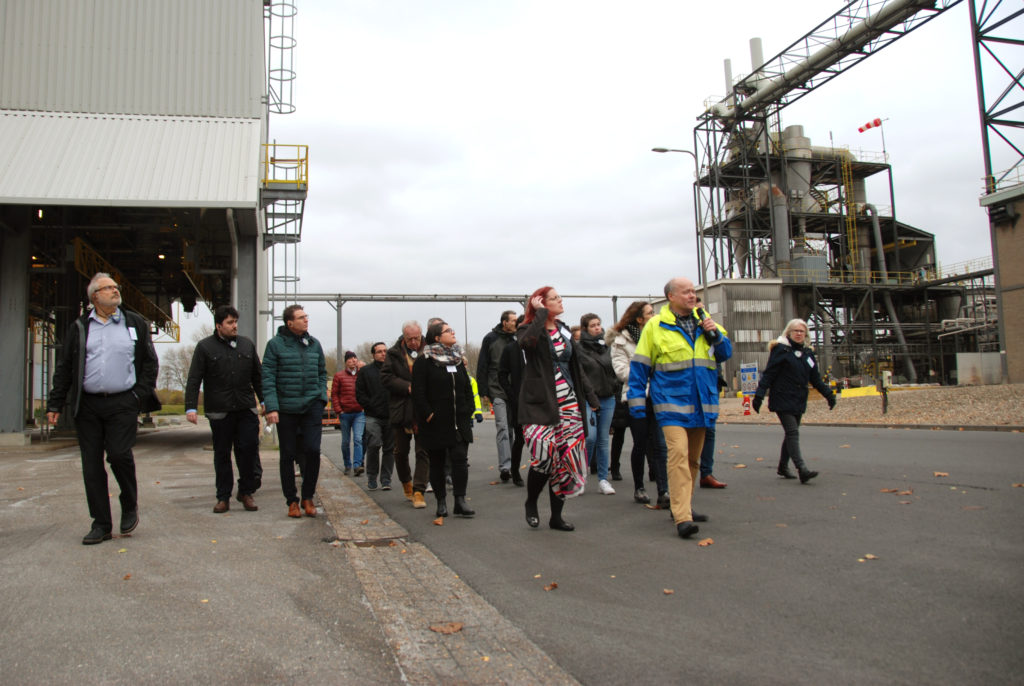